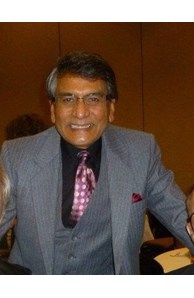 "My Philosopphy about Real Estate is quite simple. I HOLD PERSONAL AND PROFESSIONAL ETHICS

AND INTETGRITY TO BE THE CORNERSTONE BY WHICH I CONDUCT BUSINESS AND THEREFORE,

OFFER HONEST COUNSELING WITH THE BEST QUALITY OF PROFESSIONAL SERVICE"

Born in Kenya and raised in Tanzania, East Africa, SHIRAZ was educated in England and the USA

And has been a REALTOR CONSULTANT, since 1978. His extensive travels in Africa, MiddleEast, Europe and Asia,

have enhanced his natural ability to work perceptively with People of diverse backgrounds and requirements.

He received his Master's Degree in Internatioinal Management-Marketing, fro the American Graduate School of International Management(Thunderbird). He has represented clients from England, France, the MiddleEast, Philippines, Vietnam,India, Pakistan , China and Africa.

with the local largest companies and was also a member of its prestigious President;s Club.

By demonstrating a consistently outstanding performance since 1979, SHIRAZ, has received numerous other honours

in the form of trophies, plaques, citations and commendatioins in recognition and appreciation by the company of his exemplary

I have enjoyed and cherished working with First Time buyers,

As well as Up-scale buyers in all price ranges.

are the words that describe SHIRAZ. As a professonal Real Estate Consultant, I always, sets High Standards

process.And in Doing so, I am able to turn the VISION INTO REALITY-----of my All Clients in ALL price ranges.

SHIRAZ is equally active in Civic and Community Affairs.

He was the President-Elect and Special Project Chair of the Tucson Civitan International, an organization closed associated with the Special Olympics. He was also the President of the Filipino American Samapaguita Club of Tucson.

In December of 1999, he was appointed the President of the Cultural Exchange Council-Tucson Meet Yourself for three years and was awarded Council's President's Oustanding Service Award. He also served on the Board of Indian Association of Southern Arizona for two consecutive terms. He also had the honour of serving as the Vice Chair for the ASian Census 2010 in Tucson. He has also served as an Asian Interlocutor for several Community-Out Reach projects.-as well as Political fund raisers.

SHIRAZ A WDOW, WAS MARRIED TO LYDIA YASMEEN FOR 30 YEARS AND IS A PROUD FATHER OF FIVE GROWN UP CHILDREN.

MOST OF THE COMMUNITIES IN TUCSON METROPOLIS, AS WELL AS,