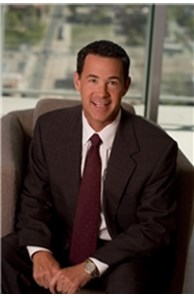 A real estate veteran with more than two decades of experience, Chris Mygatt is the President and Chief Operating Officer of Coldwell Banker Residential Brokerage in Colorado. As President and COO, Chris oversees 14 offices and more than 1,300 Independent Sales Associates throughout Colorado. In 2007, the company serviced more than 11,300 buyers and sellers and marked an astounding $3.6 billion in sales.

Coldwell Banker Residential Brokerage Colorado has reached phenomenal heights including being honored in 2007 with the Spencer Griffin Synergy Award, a prestigious honor bestowed on one Coldwell Banker brokerage worldwide that best exemplifies excellence in one-stop shopping. During Chris’ tenure as President and COO, the company has also earned top honors in mortgage and title capture, thanks in large part to its partnerships with Coldwell Banker Home Loans and Guardian Title. Continued success lies in the demand Chris has created both on a local and regional basis, serving as an industry analyst for the Relocation Council, a local Economics Summit which featured Denver’s Mayor, a national marketing director’s annual meeting in which the President of Frontier Airlines’ spoke and for dozens of local rotary meetings and events. He has also been featured as a spokesman in dozens of local publications including the Denver Business Journal, Rocky Mountain News, the Channel 9 News and the Denver Post. Chris entered real estate in 1986 as an onsite condominium sales representative for Fowler Real Estate, formerly a Boulder-based boutique brokerage. An extraordinary talent from the onset of his career, Chris became the office’s top Independent Agent his first two years in the business, closing 25 and 40 units, respectively. He moved up the ranks quickly and, soon after, the Fowler executives recognized his immense talent and recruited him to manage the company’s main office.

Chris quickly went to work as Manager of the brokerage and over the next several years, he helped grow the company from nine real estate professionals to more than 135. Fowler Real Estate eventually joined Better Homes & Gardens and Chris remained with the brokerage as an executive, helping to spearhead a series of acquisitions that would eventually grow the company to more than 300 Independent Agents.

Chris was named President of Better Homes & Gardens’ Northern Colorado operations in 1996 and after a four year stint as a successful and highly productive leader, chose to resign from the position in 2000. Chris joined Coldwell Banker Residential Brokerage in 2000 as the company’s Executive Vice President. Between 2000 and 2001, he and his fellow Denver leadership group were responsible for acquiring a host of Colorado’s most prestigious and well-respected real estate firms including Perry and Butler, Van Schaak, Moore and Company, Frontier GMAC and several Prudential affiliates. In all, the company acquired six companies in the span of just 12 months, growing the brokerage’s size by nearly double. In 2004, Chris was promoted to President and Chief Operating Officer where he remains today.

A native of Montana, Chris relocated with his family to Boulder, Colorado at the young age of three and since that time he has called Colorado home. Chris studied economics and finance at Colorado State University. While attending CSU, Chris met his wife and best friend, Marcee, while attending a ballroom dance class. The couple began dating and soon after graduating, married. This year the couple celebrated their 19th wedding anniversary. The couple resides in the Washington Park area of Denver and has one daughter, Lindsey, who attends Denver School of the Arts. An active family in their own right, Chris, Marcee and Lindsey enjoy cycling, skiing and traveling.

Always one to believe more in the power of action than simple words, Chris and his family recently made a conscious decision to adopt green principles as a way of living a more eco-friendly existence. In doing so, the couple purchased a Smart Car from France, of
which 95% of the car is suitable for recycling. Chris now proudly uses his Smart Car for commuting to the office and to individual Coldwell Banker Residential Brokerage branch offices throughout Colorado.

In his spare time, Chris enjoys volunteering with a host of charitable organizations including Habitat for Humanity, Coldwell Banker’s Ride the Range, Up with People and, an organization that is particularly close to Chris’ heart, Angel Flight, a volunteer-based nonprofit organization comprised of aircraft owners that provides families whose children have medical needs with air transportation from their homes to treatment facilities. As a licensed pilot and the owner of his own Pressurized Beechcraft Baron aircraft, Chris is not only a supporter of the organization but he is also a volunteer.