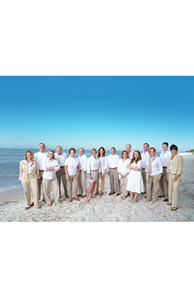 Doug Grant and his team, The Grant Group specialize in Beach and Waterfront properties, and Luxury Golf Community residences. The Grant Group ranks consistently among the top producing agents in all of Florida, and takes pride in finding their clients the ideal opportunity; whether that particular property is currently on or off the market.


The Grant Group repeatedly exceeds the expectations of their clients through superior market knowledge and signature service. With the National and International presence of Coldwell Banker, The Grant Groups aggressive marketing approach is second to none.

Doug is originally from Elyria, Ohio and attended Cranbrook School in Bloomfield Hills, Michigan. He earned a Bachelor’s degree in history and marketing from Wittenberg University in Springfield, OH.

Barb is an avid tennis player and golfer. Originally from Cherry Hill, NJ, Barb has lived in Naples over 14 years and has been a member of the Grant Group for 7.

Rick began travelling from Media, PA to Naples over 30 years ago and has spent his entire career in Real Estate, including sales, building, land sales and development.

Paul is a former resident of Ridgefield, Conn. and has lived in Naples for the past ten years. A graduate of Rutgers University, Paul was employed by the U.S. foreign- service and subsequently as a V.P. and officer with major U.S. and foreign corporations. His extensive people related background also includes real estates sales in Connecticut.

Originally from Seattle, WA, with a Master's Degree in Interior Design from Washington State University, Chris moved to Bonita Bay from Charlevoix, MI in 2000, where she and her husband, Joe, enjoy golfing and boating.

Originally from Appleton, Wisconsin, Judi has been a Florida resident for over 25 years. Prior to joining the Grant Group, she worked for Bonita Bay Properties. She has an extensive background in Real Estate and accounting. Judi attended the University of Stevens Point.

Using his extensive Real Estate and building background Craig excels in putting sellers and buyers together. After 17 years in commercial development in Louisville, Ky this Minnesotan moved to Florida and became involved in Boat Condo and Real Estate development.